In January 2018, a group of scientists, government officials and conservation representatives gathered in Trinidad to talk about parrots. This included those blue and golds trying to rebound in the wild, as well as the macaws now living in homes as pets. Since having captive parrots is still a bit controversial, there aren’t many resources for people to learn about how to care for them.

Bernadette Plair, who determined that wild macaws would not go extinct in Trinidad on her watch, decided that helping people to care for any parrots in their homes was equally important. Thus, Bernadette and her colleagues set out to provide an educational opportunity, and Phoenix Landing was asked to participate in this laudable endeavor.

I spent the first couple of days meeting with Forestry officials, game wardens, and conservation representatives. We talked about the needs of captive birds, including those confiscated and permanently living in cages at the Wildlife Section. Our goal was to provide officials with additional information they can share with local residents about caring for pet birds, and also use for those macaws living in government facilities. The need for enrichment, showers, good food, behavior knowledge, and medical support are relatively new topics for Trinidad residents. 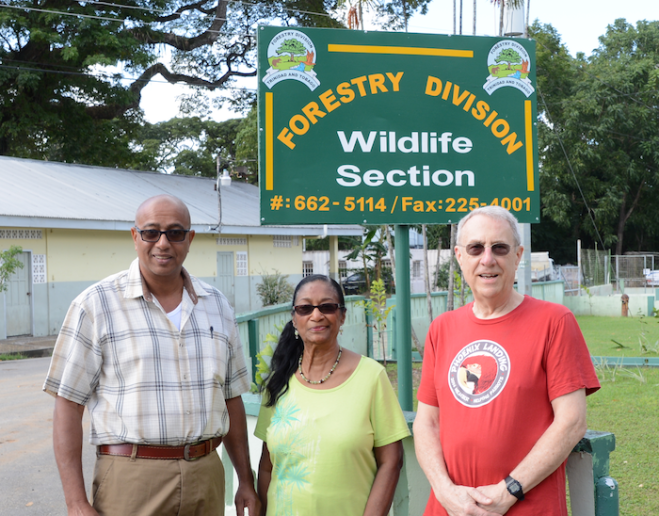 For the last four days of my visit, we hosted parrot care classes for Trinidad residents and veterinary office staff. Well over 130 people attended! Although there is still some confusion about very old laws regarding parrots kept in homes, there is definitely a desire by the local people to acquire more information about how to care for their birds. We applaud their determination to make sure their companion birds thrive! We also hope that Bernadette Plair and her colleagues will continue to be successful in sustaining and growing the wild macaw population on Trinidad as well. They are working hard to inspire and educate the public about this conservation effort. We are so impressed with their success so far!

On the last day we visited the Nariva Swamp to observe macaws that had been reintroduced into their native habitat. It was very fulfilling to see them flying free, but also sadly poignant knowing that the macaws in our homes will never fly free nor ever speak their native language.

On March 3rd, 2018 in Springfield VA, our guest speaker will be Dr. Leo Douglas, immediate past president of BirdsCaribbean. He will share more information with us about the parrots of Trinidad, as well as other areas in the Caribbean. We certainly hope you can join us!